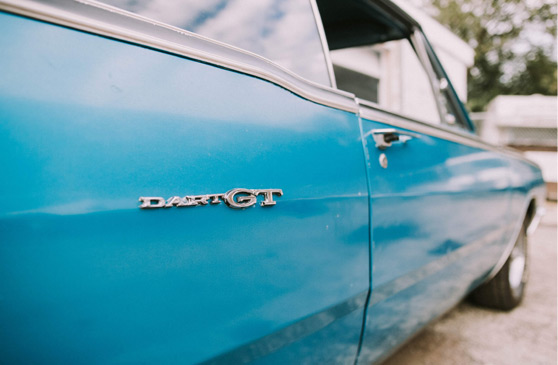 Where do we start with Bart’s Dart?

Bart had his eyes set on this Dart for some time before he bought it. He had been bugging his friend Dick Haskins for years about selling him the Dart. One day, he finally called Bart and said “Hey, I want to sell the dart, and you’re the first person I’m offering it to.” Bart and his brother Brian decided to go take a look. 30 seconds after walking in, and a kick in the shin from his brother, Bart bought the Dart for $1000 and some transmission work on Dick’s truck. As most car enthusiasts would agree, it was a hell of a steal, especially for an old Mopar as clean as the Dart.

Soon Bart, Brian and Bart’s son, Brendan, began working on the Dart. They took out the old slant 6 engine and replaced it with a 360 out of an old Cordoba. They made the mistake of using a 904 transmission. It has been nothing but problems since and Bart often kicks himself for not going with a 727. It should be noted, however, that the kickdown linkage was not connected. They believe that this is part of the reason they have been having so many issues with this transmission. Aside from the paint, everything else on the car is original.

About 8 years ago, Bart’s dear friend, Jim Quattrocki or “Rocky” for short, asked him what he would like to accomplish outside of his business. Bart’s response was that he always wanted to drive his car. Rocky loved this idea and decided to take a shot at a kickstarter to help raise the funds needed to both restore the Dartand document the process.

Unfortunately, the kickstarter fell short and 8 years later, there has been little progress to the Dart. The silver lining in this story though, is Mercedes Benz. Bart’s son, Brendan, never gave up on making his father’s dream a reality. While contacting different companies for sponsorship opportunities, Mercedes Benz caught wind of Bart’s dream and wanted to help in any way that they could. While they couldn’t help with the restoration of Bart’s Dart, they felt they could give him the experience of a lifetime.